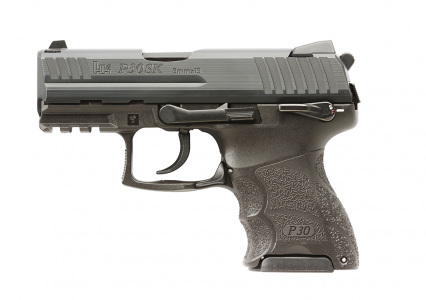 
The subcompact model of the renowned P30 handgun, P30SK (SubKompact) series has all of the sought-after characteristics of the larger frame P30 and P30L pistols but in a more concealable design.

The completely adjustable P30 grip feature — consisting of interchangeable backstraps and lateral grip panels — is replicated in the ultra-compact grip frame of the P30SK. This allows the pistol to be easily modified to fit to any individual user.

And like its larger frame counterparts, the P30SK is available in multiple trigger firing modes including HK’s enhanced double action only “Law Enforcement Modification (LEM).” For the P30SK, the LEM trigger is configured with a “light strike V1” setup — requiring approximately 5.4 pounds-force to pull the trigger.

Other trigger modes include conventional double action/single action (DA/SA) with a serrated decocking button located on the rear of the frame. The DA/SA mode is available with and without dual ambidextrous manual safeties located on the left and right side of the frame. Other ambidextrous controls include dual slide and magazine release levers. Like all P30 pistols, the P30SK features an automatic hammer safety and firing pin safety.

An abbreviated Picatinny rail molded into the front of the frame enables weapon lights, lasers, or other accessories to be easily mounted. All P30SK models have been extensively tested during a three year development process.

Despite their small size, P30SK subcompacts have excellent weight and balance making them naturally pointable, easy to control, and accurate to shoot; currently available in 9 mm.